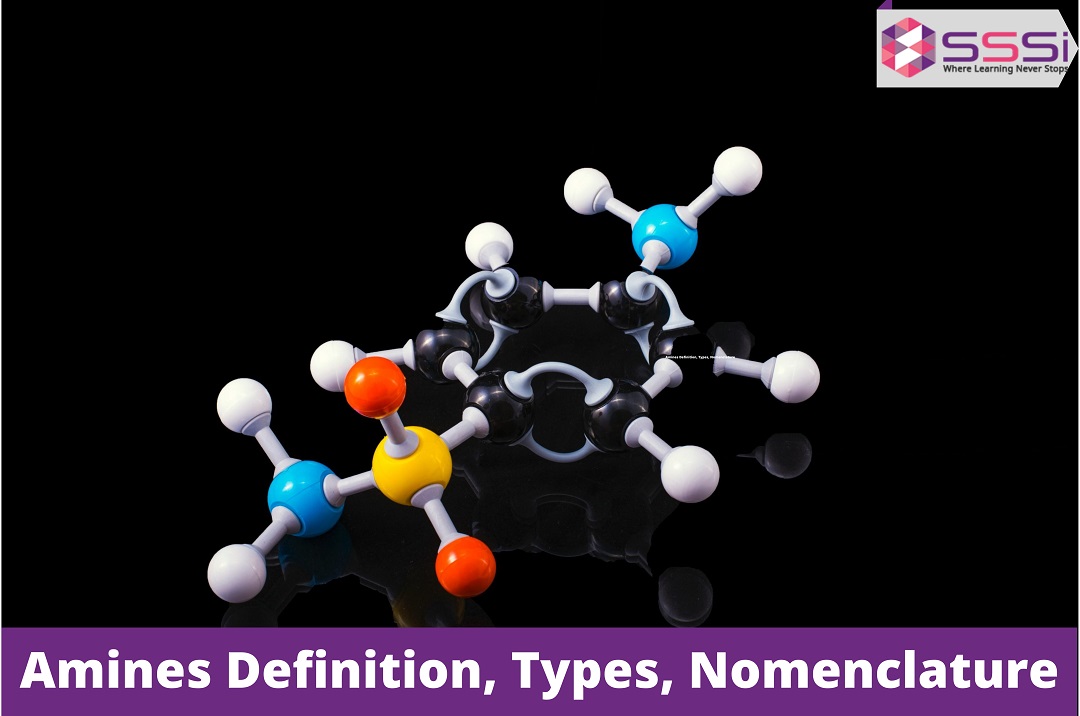 Amines are chemical molecules that contain a lone pair of nitrogen atoms. These are generated from ammonia, either theory or practice (NH3). This significant family of chemicals is made by substituting alkyl groups for one or more hydrogen atoms in an ammonia molecule. Proteins, vitamins, alkaloids, and hormones all contain them in nature. We will discuss all the aspects of Amines in this blog as it includes everything from the definition and types to preparation and its uses, and the best part among it all are that it has fun facts at the end of the blog, which will help you to develop your interest in the topic.

Amine is a chemical substance generated from ammonia (NH3). They are classified as functional groups of organic nitrogen compounds comprising nitrogen atoms with a lone pair in organic chemistry. Alkaloids present in some plants, such as histamine and catecholamine neurotransmitters, are just a few examples of naturally occurring amines (dopamine, epinephrine, and norepinephrine).

Amines are classified as primary, Secondary and Tertiary Amines based on the number of Hydrogen atoms replaced by the NH3.

There is some definite set of rules when we name the compound, which is called nomenclature. To name a compound, the following are the three primary necessary things:

The most popular and conventional system for naming amines recognizes the group connected to the nitrogen atom and then suffixed with Amines. As in methylamine CH3NH2; N-ethyl-N-propylamine (or ethyl (propyl) amine), CH3CH2NHCH2CH2CH3; and tributylamine, (CH3CH2CH2CH2)3N.

The prefix tri or di is added before the name of the alkyl group in secondary or tertiary amines.

The IUPAC system replaces "e" of alkane with the word amine named alkanamines.

If more than one amino group is present at different positions in the parent chain, their positions are specified by assigning numbers to the carbon atoms bearing NH2 groups and attaching a suitable prefix to the amine, such as di, tri, etc. The letter 'e' of the hydrocarbon part's suffix is retained.

Nitrogen has five valence electrons, so it is considered the trivalent lone pair. As per the VSPER theory, sp3 hybridized is the hydrogen present in the amines, and it is pyramidal in shape instead of tetrahedral shape because of the presence of a lone pair. It is the general structure of the sp3 hybridized molecules. Depending upon the configuration of amines, each of the three sp3 hybridized orbitals of nitrogen overlap with the orbital of hydrogen of carbon. C-N-H angle in amines is less than 109 degrees due to the presence of the lone pair, and this is the characteristic angle of tetrahedral geometry. The angle of amines is near about 107 degrees. By reducing nitro compounds with metals in an acidic media or passing them via hydrogen gas in the presence of finely split nickel, palladium, or platinum, the nitro compounds are reduced to amines.

While reacting with an ethanolic solution of ammonia, alkyl benzyl halide undergoes a nucleophilic substitution reaction in which an amino group replaces the halogen atom; this process of splitting the C-X bond by an ammonia molecule is known as ammonolysis.

Primary amines are produced on the reduction of nitriles with lithium aluminium hydride or catalytic hydrogenation.

Amides on reduced with lithium aluminium hydride result in amines.

Primary amines are made via the Gabriel synthesis method. When phthalimide is treated with ethanolic potassium hydroxide, it creates a potassium salt of phthalimide, which yields the main amine when heated with an alkyl halide and alkaline hydrolysis.

The transfer of an alkyl or aryl group from the amide's carbonyl carbon to the nitrogen atom occurs in the Hoffmann bromamide degradation process. As a result, the amine created has one less carbon than the original amine.

The following are the various uses of amines:

This topic is important from the exam perspective; therefore, it is essential for the students not to neglect the chemsitry as you may find direct questions from the subject. If you are in search of the experts who offer you the best Chemsitry classes, then your search ends here. As we, SSSi offers the best online chemistry coaching classes for the students to ace their exam preparation. The following are the additional key benefits of our services you can avail of: