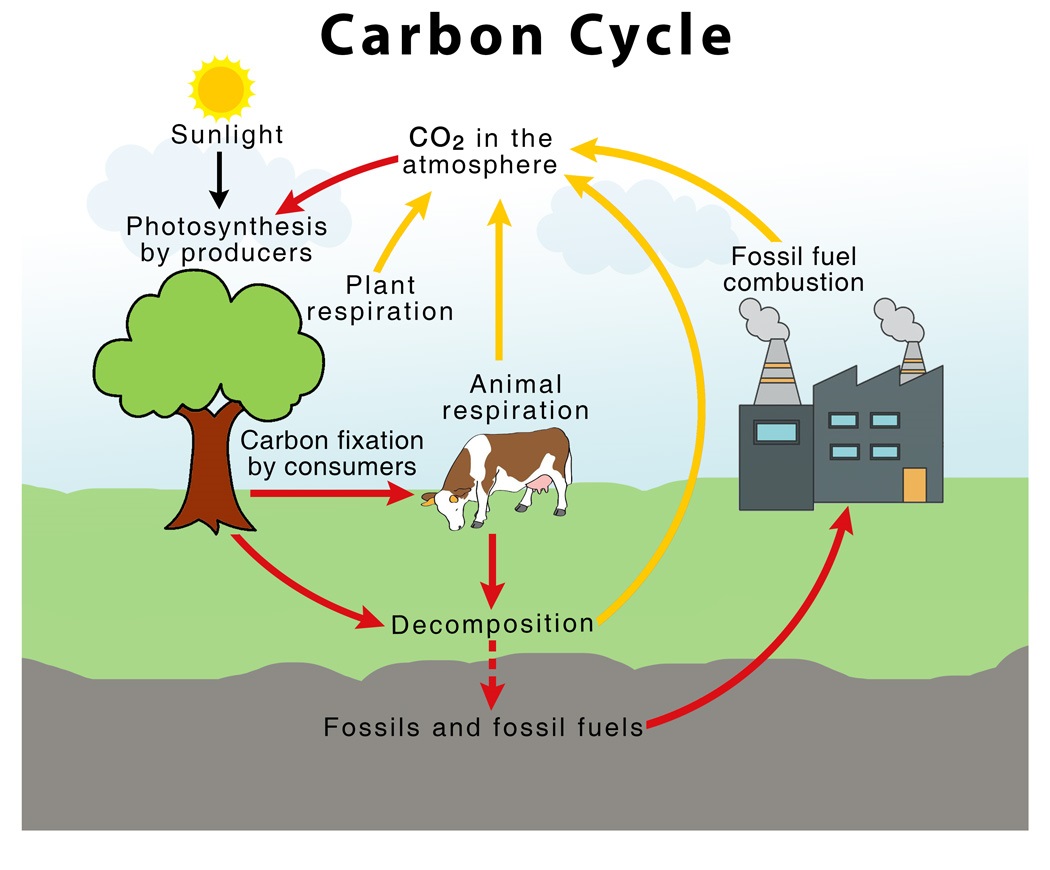 Carbon has the property of forming stable bonds with other molecules and hence a sturdy structure, which makes it an essential part of our life.

The carbon cycle is responsible for all the movement of carbon in the earth's various systems. It is a cyclic process between living organisms and the environment that involves the movement and transformation of carbon.

Steps of the carbon cycle to maintain balance:

1- Plants absorb carbon present in the atmosphere for the photosynthesis process.

3- Fungi and bacteria are decomposers. When plants and animals die, these decomposers eat them. Decomposition process results in carbon again in the atmosphere.

5- Fossil fuel is used by humans for various activities, returning carbon into the atmosphere.

Steps of carbon cycle on Land:

Plants absorb carbon-di-oxide from the atmosphere and prepare starch by taking water from the soil and energy from the Sun described in class 9 science books. Following is the process followed by carbon for movement from plant to atmosphere:

In the 4 steps of the carbon cycle mentioned above, water, energy, and carbon-di-oxide are released when oxygen combines with sugar. When livings consume sugar, lactic acid is produced, which breaks down in water and carbon-di-oxide in the presence of oxygen.

Steps of the carbon cycle in the ocean

Oceans and seas also play a vital role in the carbon cycle, you must have read this in class 7 science, isn't it? They absorb more carbon than they release; their property of absorbing more carbon is known as carbon sinks. Following are the 4 steps of the carbon cycle that take place in the ocean:

Carbon plays an essential role in every life existing on the earth. Hence, the carbon cycle is very important to maintain that balance between them. Let's discuss some of its importance:

1- For life:Carbon is an essential element for the existence of life. All living beings are made of it in some way. Life gets disturbed if the carbon cycle process fails.

2- For maintaining balance in the ecosystem:Serious environmental disasters like global warming are caused due to imbalance of the carbon cycle.

Class 8 science students studies, there is a misbelief that humans are creating new carbon in the atmosphere through their activities. But in actuality, when coal is burnt to produce electricity or gasoline, it is just the movement of carbon from one place to another, from a solid form to a gaseous state. The main problem is carbon-di-oxide; we are releasing carbon-di-oxide into the atmosphere at a drastic rate in less time. Humans emit carbon from many sources, from burning fossil fuels to clearing forests. The burning of coal produces hydrocarbon, which is a compound of carbon and hydrogen. The thermal and manufacturing industry depends on hydrocarbons. The incomplete combustion of hydrocarbon causes air pollution. Carbon-mono-oxide is another compound of carbon that is harmful to humans. Carbon-mono-oxide is not directly responsible for global climate change, but it produces methane after a reaction in the atmosphere, which is detrimental to the climate. An artificial carbon radioisotope of carbon is carbon-11, which is used for monitoring therapeutic response to cancer and diagnosis of cancer. They are high-energy radiation but don't affect the environment as their life is very short.

Short-term and Long-term are the two types of carbon. Short-term, as its name suggests, occurs in a short time. Carbon takes just days, months or years to flow through carbon sources. Whereas in the long term, it takes thousands of years. The process of the formation of coal takes 300 million years. Photosynthesis, respiration, exchange, sedimentation, extraction, and combustion are the six processes that take place in the carbon cycle. Most of the carbon in the atmosphere is carbon-di-oxide. Carbon starts its journey from the atmosphere to plant, from plants to animals, then from plants and animals to soil, and from living things to the atmosphere, and in last from the atmosphere to the ocean.

Hope you would like this article about the carbon cycle, the steps involved in the carbon cycle, and the importance of the carbon cycle. Contact us if you want to ask any queries regarding online classes for class 10 science, class 11 biology, and class 12 biology. Join and explore chemistry with us.