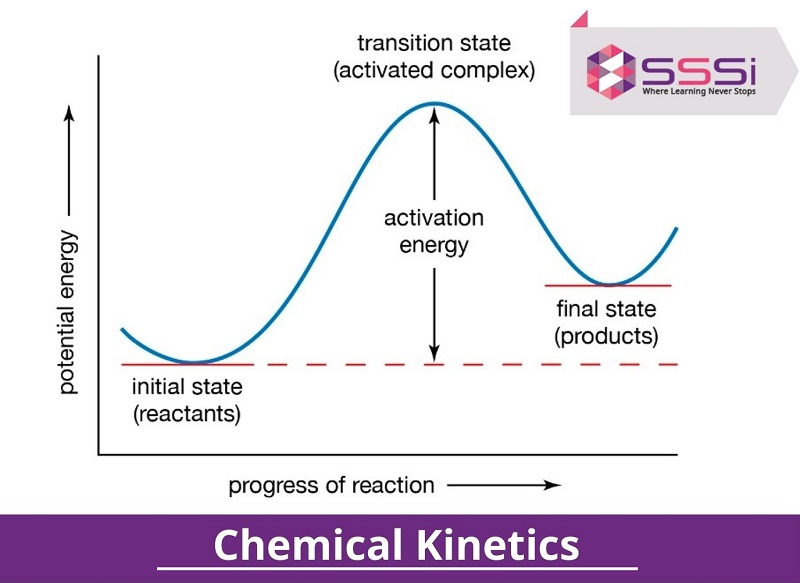 Chemical kinetics, which is based on understanding chemical reaction rates, is one of the most important fields of physical chemistry. It can be compared to thermodynamics, which is concerned with the direction in which a process takes place. As the chapter consists of a large number of chemical reactions and numerical difficulties, this chapter might be overwhelming. In this blog, we will cover the entire concept of kinetics which help you to build a general understanding.

What is Chemical Kinetics?

Chemical kinetics is an area of science that discusses reaction rates, variables affecting reaction rates, and reaction mechanisms, among other things. Chemical kinetics, often known as reaction kinetics, is a branch of physics concerned with studying reactions. The chemical reactions in the kinetics take varying amounts of time to complete depending on the type of the reactants and products used, as well as the circumstances in which they are carried out. Some reactions, such as explosive reactions, take a fraction of a second to complete, yet the rusting of a wrecked ship might take years. At a given temperature, a reaction involving the breakdown of a weak bond(s) is more powerful than one involving breaking a strong binding.

The rate of a chemical reaction is determined by the reactant or product concentrations and the time necessary to accomplish the chemical transition.

The change in concentration of a reactant or product in unit time may be described as the rate of a chemical reaction. It can be expressed as follows:


Molar, sometimes written as mol/L, is the S.I. unit for measuring the concentration of a chemical. It indicates the number of moles in one litre of the chemical.

It can be defined as the rate of change in the combination of the reactant or product at an interval. Suppose, A is the substance that can change the concentration

dx is the small change

It is the interval of time.

Average Rate- From the start of the reaction until the end, the difference between reactions, products, and time is considered.

Factors Affecting the Rate of Reaction in Chemical Kinetics

For the majority of reactions, the concentration and rate of reaction are proportional. As a result, when the concentration is twice, the response rate is likewise doubled. According to the collision hypothesis, if the number of reactant molecules is doubled, there will be twice as many collisions occurring at the same moment.

The rearranging of atoms between the interacting molecules and the resultant is a chemical reaction. New bonds are established while old ties are severed. As a result, the type and strength of the bonds in reactant molecules significantly impact the pace at which they turn into products. Reactions involving less bond rearrangement happen quicker than reactions involving more bond rearrangement.

The rate of reaction in the homogenous reaction increases and becomes double or tripled when the temperature rises to 100 C.

When certain wavelength radiations are absorbed by reacting molecules, the rate of several chemical processes rises. Photochemical reactions are the name for these kinds of reactions.

Chlorine, for example, may be safely combined with hydrogen in the dark since the reaction between the two is very slow. The reaction is explosive when the combination is exposed to light.

Order and Molecularity of Chemical Kinetics

In the rate of law expression, the sum of the power of the concentration of the reactants is called the order of that chemical reaction. It can be expressed in fractions, zero, or whole numbers.

By the equation of the rate law

The rate law equation is

x is the order of reactant A

Y is the order of reactant B

The overall order of the reaction is x+y

The following are the order of reaction:

The rate of reaction in zero order reactions is proportional to the zero power of the reactant concentration. Assume that the response is –

R = -kt + I {Integrating both sides and I is integration constant}

Further substituting the value of I in the above equation.

Hence we get the zero order reaction equation:

The rate of a chemical reaction is proportional to the reactant concentration [R] to the first power.

After integrating the differential rate equation and adding 1 to the power of the reactant, we get the equation for a first-order chemical reaction.

Where [R] 1 and [R] 2 are the reactant concentrations at T 1 and T 2 during the chemical process, respectively.

In the case of a zero-order reaction,

The molecularity of a process may be defined as the number of molecules of reactants that participate in a certain step of the reaction, the concentration of which may or may not be altered. Here are a few examples:


Rate of Constant in Chemical Kinetics

Considering A and B the reaction of the product at the specific temperature, then the rate of reaction is

Where k is the rate of constant.

The following are the essential factors responsible for the rate of constant:

Here, A is the frequency factor and,

Comparing the rate of constat at the varied temperature


What is the distinction between a rate constant and a rate of reaction?

The following chart shows the distinction between rate constant and rate of reaction:

Chemical Kinetics is one of the most critical chapters of physical chemistry where students fail to grasp the concept in depth. However, to score high grades in the Chemistry subject, it is pivotal to understand the concept from scratch, for which the expert will guide you in a better way. SSSi Online Tutoring Services offers the best online chemistry tuition for class 12 at the best sensible price range. The following are the additional key benefits you can avail of: