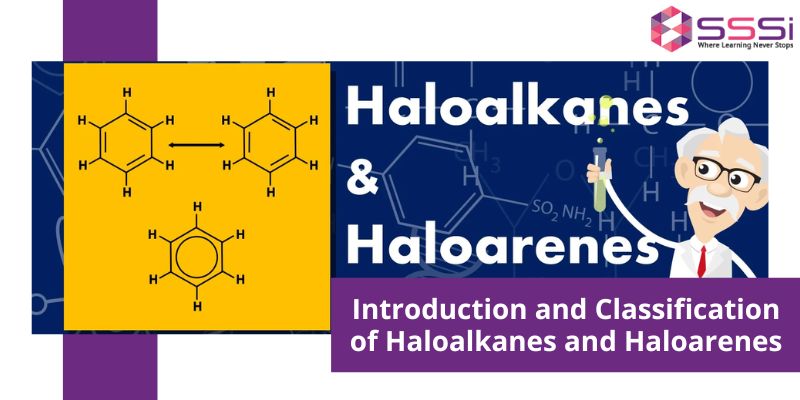 Haloalkanes and Haloarenes already exist in the environment; surprise? During the Vietnam war, haloarenes were used as herbicides to deplete jungles so that that war would become easy. As they cannot decompose by bacteria, they are still present in the soil. Let us know more about them.

Alkanes are those which have only one covalent bond between carbon atoms, also called saturated hydrocarbons. Whereas alkenes have one or more double or triple covalent bonds between carbon atoms, also referred to as unsaturated hydrocarbons. Haloalkanes and Haloarenes are the Halogen derivatives achieved after replacing hydrogen atoms with halogen atoms.

Haloalkanes are also known as Alkyl halide and halogenoalkanes. Trichloromethane (CHCl3 (chloroform)), Bromoethane (CH3CH2Br), Iodopropane etc are the examples of it. It has existed on earth for centuries; chloroethane is an example, produced in 15th century. Humans produce most haloalkanes, but non-artificial haloalkane also exists, which are produced due to synthesis by bacteria, Seawood, and fungi. Halogen is electronegative, whereas carbon attached to it is electropositive, resulting in an electrophilic carbon, which attracts nucleophiles.

Haloarenes are also known as halogenoarene or aryl halide. Ocean water has chloride and bromide used by marine organisms to produce aryl halides. At high temperatures, they react with ammonia to produce anilines. Production has been declining since 1980 because of adverse environmental effects. They are aromatic compounds with hydrogen atoms attached to aromatic rings that are substituted by halide. F, Cl, Br, I, and At are the group 17 elements. In between C-Cl and C-F, electronegativity of F is more than Cl.

CLASSIFICATION OF HALOALKANES AND HALOARENES:

The classifications are as follows:

BASED ON HYDROGEN ATOMS

They can be mono, di, tri, tetra etc. Their name symbolizes the number of hydrogen atoms contained in their structure.

They are of three types named Gem-dihalides, Vic-dihalides, and Terminal halides. Explanations of these are as follows:

CLASSIFICATION BASED ON NATURE OF CARBON ATTACHED:

Depending on the nature of the carbon atom, Alkyl halides are divided into three types: primary 10, secondary 20, and tertiary 30. Neopentyl Bromide, Secondary-Butyl carbon, and Tertiary-Butyl Bromide are examples, respectively.

BASED ON COMPOUNDS WITH Sp2 HYBRIDIZATION

1. Vinyl halides: The Hydrogen atom is attached to one of the carbon atoms C=C

2. Aryl halides: The Hydrogen atom is attached to carbon in an aromatic ring.

BASED ON COMPOUNDS WITH Sp3 HYBRIDIZATION

USES OF HALOALKANES AND HALOARENES:

It’s easy to find their use in daily life and industrial purposes. Some of them are the following:

DIFFERENCE BETWEEN HALOALKANES AND HALOARENES:

Halocarbons are widely used nowadays, but some adversely affect our environment by being toxic and pollutants. Methyl bromide and CFC are examples of toxic compounds with no antidot provided. They attack your respiratory system and nervous system. If you want to explore more, we provide online tuition classes for chemistry, where highly qualified teachers make you visualize chemistry and give you real-life examples so that you can easily connect. High-quality course material, interactive sessions, discussions, and Q&As, are the facilities provided to you.