What is Sublimation? What are its principles, process and examples? 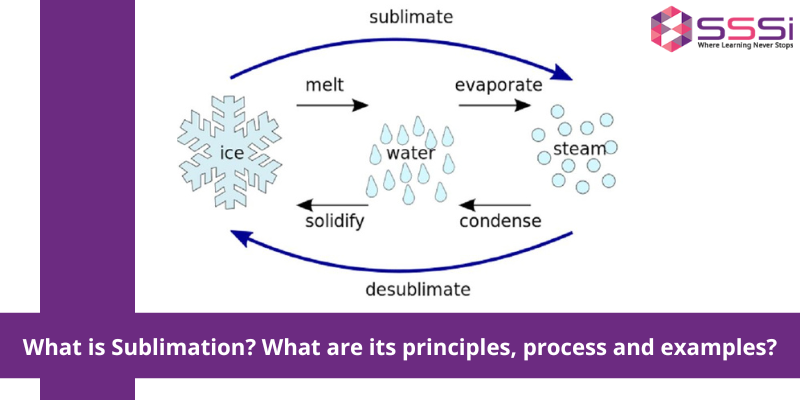 Solid, liquid, and gas are typical phases for most substances. Every substance has its own physical and chemical properties with its boiling and melting point. To change a solid substance into two other types, it needs energy in form of heat, called an endothermic reaction. So, an endothermic reaction in sublimation changes a solid phase into the gaseous phase. During the phase transition, a solid directly converts into a gas without any intermediate state (liquid). It occurs when atmospheric pressure is too low. When the temperature and pressure of a substance are below to triple point of the substance, sublimation happens. It's a physical reaction rather than a chemical one. For Ex, Burning wood is not an example of sublimation because combustion occurs due to reactant oxidization, but sublimation needs energy as input.

The word sublimation is derived from the Latin word "sublimate", which means "to raise", used since the late 1550s. "Jabir Ibn Hayyan (Gerber)" was the first who explain this process in the 700s. Dry Ice was discovered by him and he is known as the "father of chemistry".

Basically, In this, the absorption of heat process takes place, and due to it, molecules get excited and try to escape from weak attractive forces of other molecules. Depending on temperature and pressure, these escaped molecules either melt or become gas. So, you can define sublimation as the process when a solid becomes gas.

Examples of sublimation from industries:

Examples of sublimation from daily life:

We see things around us based on sublimation and, yes, valuable to us. For instance, you can take any example like air fresheners, naphthalene mothballs, or camphor. You feel the sublimation effect visibly. So let's make a note of some of the sublimation applications. Although you have studied these in Class 10 science.

As we know, when any phase changes, there is always energy associated with it. In sublimation, heat is provided to change from a solid to a gas state. The solid that is transforming into gas is sublime. When vapors get cooled, the solid particles formed are called sublimate, and the sublimation process only applies when complete physical change occurs in the state. A solid directly sublimes into gas, and both the temperature and pressure of that solid should be below the triple point. Snow, iodine, arsenic, dry Ice, etc., are the solids that normally sublimate at normal temperature and pressure. You are free to ask if you want to learn more about the Sublimation class 9th topic, we will solve your doubts. We provide online tuition classes for Class 9 Science and Class 12 chemistry. The syllabus is designed in an easy and interactive way to help you by our experienced tutors.